I Am Very Excited To Announce...

Degrees Of Distortion, book one in my Distortion Series has officially been accepted for publication!!
I am very excited to bring this series to life!
Soon my editor will shine this manuscript up for me but until then, here is a little (unedited) teaser for you...
"Lexie stepped down the front steps that groaned loudly in protest, alerting the owner of the sleek black sports car next door. His attention drew to her as he swung a black duffle bag over his shoulder. She froze like a deer in the headlights. He was tall and shaped like a man that did nothing but physical activity. His intense eyes were staring back at her and her heart throbbed so loudly she could feel it in her fingertips.
He looked like how she pictured it would be like to come across a lion in the wild. He was captivatingly beautiful and terrifying at the same time. He gave her a friendly wave and unlike her seemed completely at ease. 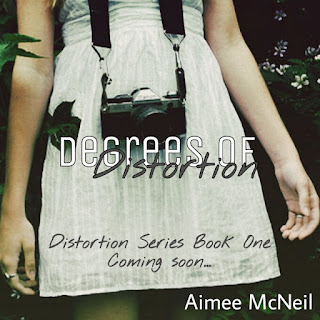 Her flee response screamed at her because she knew that if she tried to engage she wouldn’t be able to form a coherent thought. She was too drained from the night before to muster up a proper conversation. She gave a small pathetic wave in response and quickly walked up the driveway, toward the main dirt road. She could feel the heat of his eyes on her back and she forced herself not to look back no matter how much she wanted to."
Posted by Aimee McNeil at Monday, February 08, 2016